The story of a Swiss dancer and her love for Kathak-an Indian classical dance form, her artistic journey and the joys and challenges of teaching Kathak in Switzerland.

Gauri is a Swiss Kathak dancer, choreographer and teacher. She is the founder of ‘Sangeet Swiss Association’ which aims to promote Indian classical arts in Switzerland. She teaches Kathak and Yoga at Le Dance center Monique Van der Roer Villars-sur-Glâne and in the Ateliers d’ethnomusicologie in Geneva and has performed in Switzerland, India and in Europe.

Growing up with a love for dance

Gauri was born as Priscilla Brülhart in Switzerland to a Swiss father and German mother. She was attracted to dance and music since childhood; At the age of 10, she began learning the piano and continued for many years. Dance, in particular, interested her the most due to the grace in the movements and forms of expression. She started learning ‘Ballet” “Jazz’ and ‘Funky’ dance forms at the age of 17 and studied for a year in Music academy in Monaco. Her family, like many others, did not consider dance as something that could be pursued as a career. So she could not study dance or music further due to lack of a scholarship in dance or choreography. She studied economics and worked in the hotel industry for a few years, during which she pursued dance as a hobby.

Much later in 2005, Gauri was mesmerized by a show that she watched in Geneva. ‘Bharati’, was a production about Bollywood and semi-classical Indian dance. Gauri was instantly attracted towards the grace, energy and footwork of the dance form and the reflection of the culture. The show lingered on her mind for nearly a week. She joined a Bollywood dance group in Geneva and started practicing and performing. Around 6 months later, she decided to go to Mumbai, which she recounts now was like going home, which surprised her because she had never been interested in Indian culture or dance before that.

After her return to Switzerland, she heard about Indian classical music and various Indian dance forms and wanted to know more. She joined a trial Bharatnatyam class in Geneva but it was not her cup of tea. A friend suggested that she try Kathak (another Indian classical dance form). Unfortunately, back then in 2006, there were no Kathak classes in Switzerland. She did a workshop with Ms Sharmila Sharma from Paris with live Tabla- an Indian musical instrument. That day was like a revelation to her and she felt as if she had been dancing Kathak all her life and knew that it was going to be a part of the rest of her life.

Travelling to India in pursuit of Indian dance forms

She attended another workshop a few months later in July 2007 in Geneva with Pandit. Ravi Shankar Mishra, who later became her Guru (Teacher). He encouraged her to visit Varanasi in India. She went to India for a month which extended to 1.5 months. Benaras or Varanasi was initially a shock to her as everything was new to her; the crowd, the sounds, the smell. The first few days were difficult. The days were filled with dance practice and music and gradually she embraced the culture and the experiences that came with it.

Soon, Banaras became her second home. It was truly a life changing experience for her. She sold her store in Switzerland and informed her parents about her decision to study Kathak in India. She spent the next 6 years travelling between India and Switzerland training with her Guruji and other teachers in Dehradun and Delhi. She also learnt the Tabla and Yoga after being injured.  The latter completely changed the way she looked at life and brought balance into her life. For her, dance and yoga are bound to each other. She prefers the traditional forms of Yoga which focus on balance and mindfulness.

Gauri’s time in India was very enriching because of her Guru and his family. She appreciates and respects the Guru-Shishya parampara (teacher-student tradition) which is a way of transferring knowledge from the teacher to the student. She feels that being a ‘Shishya’ is a gift because she finds her Guru, Pandit. Ravi Shankar Mishra an extremely open, selfless and kind person. He believed in her as an artist and gave her strength and power to learn and master the tough dance form. Looking back at the 10 years of beautiful relationship, she feels that it has given her a lot and she is proud to carry forward the rich heritage and tradition passed on to her. The Indian community in Switzerland and in India have huge respect and appreciation for her art and the journey that she has been through.

Apart from being a dancer and choreographer, Gauri is also a teacher, something that she loves doing. Although her nationality does not matter to her students, she feels that it is sometimes challenging to be a Swiss-kathak teacher and dancer. She feels that she has to put in twice the effort compared to her Indian counterparts.  In spite of the challenges, teaching is a very rewarding experience to pass on knowledge and tradition accumulated over the years.

In 2014, Gauri founded an association called Sangeet-Swiss to encourage intercultural exchanges between India and Switzerland and to promote Indian classical dance and music in Switzerland. The association enables her to perform her own productions, invite senior artists from India to perform and conduct workshops. She collaborates with top Indian and Swiss musicians in her performances and tours, but also tries to invite young upcoming artists. In spite of her busy schedule between performing and teaching Kathak and Yoga, she travels to India almost every year to train (Riyaaz) with her Guru and meet his family who is now like her own family. She makes it a point to perform in a Mandir (temple) in India as she believes this is like a prayer for her-a selfless way giving back.

For Gauri, it is not about just performing Kathak, but to showcase the essence of India and Indian culture in Switzerland. Kathak is not just a dance, it is a way of life and she wants to spread the rich culture, heritage and joy that she gained from her artistic journey with Kathak to as many people as possible in Switzerland and beyond.

You could read more about Gauri on her website, www.priscilla-bruelhart.com. The YouTube link to her performances is here: Priscilla Bruelhart. 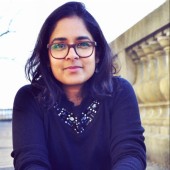 Our in-house illustrator - Sharanya Mageshwaran is a freelance illustrator who loves painting and sketching with fauvist expressionist abstract themes. More of her artwork can be seen on her blog, www.somelightandcolor.blogspot.ch

It’s all about shared values!

How to say “What is your name?”

Keep the discipline and celebrate dance