The Fasnacht frenzy is mounting! With its “Güügenmusik“ bands, the creative floats, outlandish costumes and “Tschäggättä” masks, the celebrations take place at different locations across Switzerland through the months of January to May. One definitely can’t afford to give one of these 200 odd carnivals a miss. The festivities traditionally used to kick off before the Christian Lent period of fasting began and hence the name ‘Fasnacht’.

The biggest Swiss carnival is celebrated in the Canton of Basel. And any celebration is incomplete without food. The Fasnacht specialities of this region are known for its:

The practice of making delicious fried foods during Fasnacht traditionally emerged as people wanted to empty their cupboards of the sugar and fat leftover from the Christmas time indulgence in order to prepare for the 40 days fast. The favourite Swiss foods associated with these merry, confetti strewn musical parades are:

Step 1 – Mix the flour, sugar and salt. Pour the water and oil and knead into a smooth dough. Let the dough rest in a hot rinsed covered bowl for about 30 minutes.

Step 2 – Give the dough one knead and divide it into small portions, weighing approximately 15 grams each. (One can opt to buy the ‘Fasnachtschüechli ‘moulds from the Betty Bossi shop and bake these or roll them out (like done traditionally) and deep fry these). Keep these dough balls covered with cling film or cloth to prevent them from drying out.

Step 3 – Rolling the dough is the real challenge to get the perfect Fasnachtschüechli. I would highly recommend using a heavy pizza rolling pin or pasta machine (if you happen to have one) as this needs to be rolled out as thin as possible without tearing them.

Step 4 – Deep fry these and lay on a tray. I suggest using a flat pan for frying vs. a deeper pot. I switched to a flat pan afterwards as these are easier to fry without any folds. The oil needs to be hot enough to cook them crisp but not burn them. One needs to be swift and turn these over a couple of times to make sure they are fully cooked through. If you’re new at this, it’s much easier and faster to do this as a 2 people team. One rolls the dough, the other fries.

Step 5 – Dust these with icing sugar and relish the home-made goodies!

Here is a link to the original recipe:

If you would like a cappuccino twist to these, click the link above for a coffee flavoured (non-vegan) cream to serve with these crispy treats.

Disclaimer: Opinions and methods expressed are solely of the writer. Namaste Switzerland does not undertake any obligation or liability which may arise from the content. 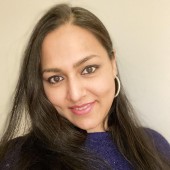 Chetana Parameswar lives with her family in Zürich and is a full-time mother of three. She pursues her creative side through food and art. IG: @chetsinthekitchen @pc_artstudio @chets_crafts. Before settling down with her family, Chetana focused on Mergers and Acquisitions at Deloitte in India. She also spent time at the United Nations in New York as an intern. Chetana holds an MBA and is a Chartered Accountant.

Phirni with a twist of nostalgia