The serene lakes, sun-lit peaks, cuisine, and luxury stores of St. Moritz are famous all over the world. In summer, if hikers and mountain bikers throng this resort town of Graubünden, then skiers and winter sports enthusiasts are treated with 350 kilometers of pistes in the cold winter time.  If you want a treat for your eyes and soul, step into the dome-shaped elegant building – the Segantini Museum. Noopur Shrivastav takes us on a tour.

Perched on the sides of the mountain about 1.5 kilometers from the St Moritz Bahnhof stands a quaint dome-shaped building overlooking St Moritz Lake. The Segantini museum stands on the Somplatz, surrounded by tall alpine trees and flanked by the cool breeze that greets its guests. Its main axis overlooks Muottas Muragel and the Schafberg.

Segantini Museum in St Moritz celebrates the work of one of the great masters of the late 19th century, Giovanni Segantini. He was recognized and celebrated for his work in Italy, Austria, Netherlands, England, and Switzerland. This museum hosts the masterpieces of Giovanni Segantini, from his early works to his last paintings.

Segantini is known for portraying the alpine life, and its hardship through his work. He also beautifully blended religion, the faith of human beings in the Almighty, and the interplay of religion, nature, human life, and other things associated with it.

Giovanni considered himself as an artist chosen by God. In his views, to portray faith in the Almighty was his divine duty as an artist.

In one of his early works in 1881-82 titled ‘Kissing the cross’, Giovanni beautifully shows the devotion of the peasant woman. While doing her duty, taking care of the sheep and her child, she is devoted to the almighty and draws strength from him. In this painting, the peasant woman lifts her baby in her arms and helps the baby kiss the cross. She seems to be imbibing the same values in her child by teaching him/her those practices that guide human beings in difficult times.

In another painting of 1886, named ‘Ave Maria Crossing the Lake’, the artist blends the simple life of villagers, their hardships, and their faith in religion. In this painting, Giovanni has humanized the trinity of the holy family. An old man is holding the anchor while the woman holding a baby in her arms is symbolic of Mother Mary.  The figures seem to be deep in the silence of prayer while the calm lake water, the radiance of the setting sun, and the village and church on the horizon create the setting for prayer.

Giovanni Segantini’s short life was full of hardships. He had a harsh childhood and adolescence. He lost both his parents at a very young age and he was in the care of his half-sister. He lived a poor life on the streets of Milan after the death of his father. He hardly got a proper education. He learned the profession of the shoemaker,  even worked as a chemist and also at photography shops. At a young age, he got the job to assist a painter and decorator. That’s where he was introduced to the world of art. To educate himself, he went on to attend evening classes.

Segantini loved nature and the simple village life, hence early on he moved from the city to the countryside of Brianza and later to Graubünden.  The simplicity of peasants, their hardships, natural beauty, harmony in nature, and people’s faith in their religion became the motif of his works. Giovanni had the talent and skill to capture the moments of life and paint them on his canvas.

Graubünden Woman Drinking at the Well

Taking a panorama view with your camera or phone is a very satisfying feeling; but can you believe that artists used simple paint and brush to depict their version of the panoramic scene more than 100 years ago? Panoramic paintings were very popular in the mid 19th century.

Segantini has beautifully blended the religious motif, alpine life, and alpine natural beauty in his paintings. In the first of The Triptych is the painting titled ‘Life’, he has incorporated different elements of life on a huge canvas. There is evening sun casting its spell on the peaks while the village is dark, peasants are guiding the herd back home and the woman under the tree is tending the baby.

The second of The Triptych is called ‘Nature’ and it depicts the life of villagers in a typical alpine countryside of the 19th century. A man and woman are herding their cattle to the shed as the sun has set behind the mountains and soon night will envelop everything in the thick of it. The vivid details in the painting speak volumes about the interrelation of livestock, human survival, and the cycle of nature, how each component is closely related and affected by each other.

The last of the Triptych paintings is called ‘Death’. Here Segantini beautifully created a peaceful and snowy setting to show the pain, beauty, and peace in death. There are people clad in black dresses to walk with the corpus. While morning light on the mountains is indicative of the new day, new life that is always believed to follow.

Giovanni Segantini wanted to paint a huge panorama of Engadin. He wanted to put his work in the 1900 Paris Exhibition, but due to the exorbitant cost involved in the project, he had to downsize his ambitious project. The Triptych is part of his vision of the huge panoramic painting. He might have added more to it if he had not suffered an acute attack of peritonitis and succumbed to it.

He was so much in love with the countryside and the simple life of villagers that in his last hours, he requested his bed to be set in front of a low lying window, from where he could admire the view of shimmering mountain peaks while he breathed his last on September 28th, 1899.

After experiencing this kind of spiritual tour via Segantini paintings, one feels refreshed to step back into the modern present-day St. Moritz, known for its superb high-end resort life, to shop, or to admire and appreciate the beauty and life around you. 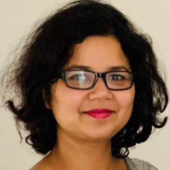 Noopur has been in Switzerland since 2016. A journalist, she previously worked as a television reporter and news anchor at Sahara television, PTN News Network and Bihar News and as a freelance journalist for The Hindustan Times, Patna.