Bringing moms together – a meet-up with a difference!

If you are mother who needs company, support or guidance in bringing up your child or need help as your roles and responsibilities change, Femmes Tische is the best place to connect. Manasa Mukka speaks with Annaliese Gisler Michaud, Head of department of Femmes Tisch, Zug and with Sreelatha Vijayananda, moderator of the Indian community in Canton Zug.

The primary aim of Femmes Tische is to integrate people with a migration background, promote exchanges and create a social network.

Femmes Tische is an award-winning national program that tries to bring knowledge to people, especially to mothers. Moderated discussions are held in a personal and fun setup in the neighborhood. Topics covered include: family, health and integration. Femmes Tische is held in 20 different languages, which makes is easier for most women to converse in their first language. Everyone is welcome to participate and exchange their experiences.

A typical Femmes Tische meeting needs a moderator, a host who agrees to hold the meeting in their home or in a familiar location close by, and 6-8 interested people from their circle of acquaintances.

Moderators are bridge builders. They are interested, communicative and well-networked personalities from their own cultural group and establish the connection between the migrant population and Swiss institutions. They are highly credible and are prepared by the Femmes Tische coaches and trainers in a practical short course to be able to organise and lead roundtables on selected topics. Through this training, these people by default receive individual support in their professional development and access to a professional and personal network.

Once ready, the moderating person seeks out a topic with the host before the roundtable. She introduces the subject with film sequences or picture material and leads the discussion. She is familiar with the social, educational, medical or legal focal points available in the region, and can make attendees aware of these offers.

Although the roundtables take place mainly in the first language of the participants, there are intercultural discussion groups in German, French or English. These rounds can also be attended by people without a migration background.

Participants are invited to be hostess or host. The roundtable can also be organised in collaboration with an institution – such as a school, an asylum shelter, a neighbourhood or family reunion. People get in touch with Femmes Tische through personal contacts and word of mouth.

After the meeting, the participants sit together in a relaxed atmosphere and get to know each other personally.

Femmes Tische in Zug has been active since 2002; and since 2006, it has been a part of Frauenzentrale Zug. It is supported by the Health office of Canton Zug.

Annaliese Gisler Michaud, who is the Head of Department of Femmes Tische in Zug handles 13 moderators in 14 languages. About 150 round tables are held each year in the Canton of Zug, of which 100 round tables are subsidised.

Annaliese says, “Femmes Tische was started in Zug especially for mothers. Before having children, these women are often employed and well-integrated. Some of them become isolated after they get a baby. Femmes Tische tries to bring them back into society and share knowledge. Initially, it was more for the Swiss ladies. Then it became more important for the expat community to utilise this facility, too.”

Topics covered in the Femmes Tische meetings range from health, education, women related topics, school, nutrition, racism, sports, fitness. The most popular of these are health, self-confidence, schooling, puberty. Themes are customised for each group based on their requirements and specific needs. At meetings with moderators, the need for new topics, new materials, issues with groups and their feedback are discussed. An annual excursion sometimes helps in brainstorming new ideas.

Annaliese makes sure she maintains a high standard of knowledge in the meetings by arranging training sessions for moderators by experts. Moderators are usually proposed by existing moderators or by the head of Femmes Tisch.

Once in two years, a big meetup is held with all moderators and participants in Canton Zug. And Manner Tisch is planned to be launched in Zug soon. It is already operational in Cantons Romandy, Zurich, Biel and Lausanne.

“Learn the language, try to meet a lot of local people, try to integrate; but keep your originality and spirit of your country of origin. Share it with the local people and use Femmes Tisch as an excellent bridge to the local community.”

Femmes Tische of the Indian Community in Zug

In December 2018, a round table session was held with 6 ladies in Zug for a discussion on the Swiss education system. Sreelatha Vijayananda, who hosted this session says, “We started the session at 9.30 in the morning with an introduction round. I then gave a general explanation about the local school system using the overview chart. Then the entire system was discussed using the material and with input from everyone. Personal experiences were shared. With Indian tea with homemade snacks and brownies, the session ended at 11.30 so that the moms could be home before their children came back from school.”

For the ladies in Zug, Sreelatha conducts regular monthly meetings in English. Through her WhatsApp group, she informs the women of the topics that will be covered in the following meeting, date and time and details of the host. She discusses one main topic and two subtopics in each meeting. Some of the popular topics among the Indian Femmes Tische meetings are schooling, nutrition and health, further education, self-confidence and addiction in older kids.

Sreelatha organises meetings on different days each month to make it easy for different women to attend the meetings. She usually conducts them in the mornings and participants take turns to conduct the meeting at their homes.

“My vision and role for the Femmes Tische are to create a community feeling, where people can connect, get informed on various educational and integrational topics, discuss and exchange day-to-day life and struggles and – most importantly, feel supported. The intention is to generate positive energy and a warm atmosphere to strengthen the ladies for their important and key role in their respective families. And, I’m happy that the Swiss system provides such a well organised support program to make the integration process easy.”

Sreelatha creates a warm and personal atmosphere for the participants by planning breakfast together at the places of the various hosts. She also adds a touch of hospitality by giving away a small present to the hosts for their effort. She encourages the participants to advertise their new enterprises in the meetings by bringing flyers or visiting cards, and adds that many new friendships are made at the meetings.

“If you want to meet people in similar situations as yours and those who can help you integrate into the community, join a Femmes Tische in your neighbourhood. It’s an excellent way for you to beat the loneliness you can face in a new situation or a new country – or to simply widen your social circle and know-how on interesting topics.”

Disclaimer: Namaste Switzerland does not undertake any financial/reputational/legal/misrepresentational impact or other obligations/liabilities that may arise from the content.

Please note: Systems and laws change. We do not confirm the validity of the content at all times. 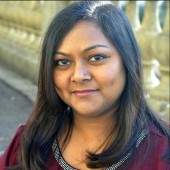 Manasa is a UX/UI designer by profession and is the designer behind Namaste Switzerland. She is passionate about art, loves to paint and make DIY projects in her free time. She also loves music and teaches singing. She is currently a freelance designer and more about that can be found on her website, www.manasam.ch. Read more about her here.

Sethubandhasana or the bridge pose

Get insured and assured!

Motherhood and Autism – My Journey so far